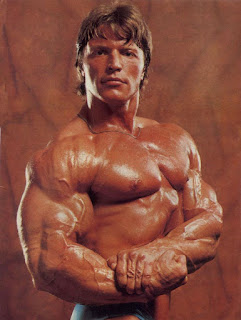 Gunnar Rosbo is frequently spoken of in the same breath as fellow contemporary bodybuilders Matt Mendenhall and Rory Leidelmeyer, who, like Rosbo, stopped competing way before they reached their full potential. The first widely published formal print introduction to Rosbo was in an article titled “Arnold Who?” written by Jack Neary in the pages of the February 1983 issue of Muscle and Fitness magazine.


The party had been under way only an hour or so and already chatter was circulating that the guest of honor bore a striking resemblance to another great European.
“My God!” cried one delighted wallflower. ” The Oak himself has put in an appearance: Arnold Schwarzenegger!”
His companion, rather more seasoned at celebrity spotting, sized up the cause of this sudden enthusiasm and replied: “I think you’ll find that’s Gunnar Rosbo of Norway, although I must say I can see why you were confused, old chum.

Read more(The Terminator that Could Have Been):

http://www.builtreport.com/gunnar-rosbo-gallery-2/
Posted by Admin at 6:31 PM